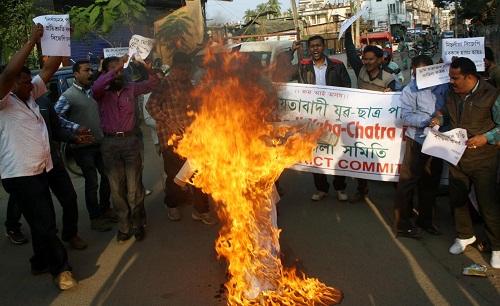 AGP, AJYCP and KMSS have strongly criticized Narendra Modi hours after the prime minister openly backed the Indo-Bangla land deal calling it a panacea for permanent solution to the immigration problem.

Apart from All Assam Students Union, AGP is quite disappointed with Modi who has openly supported the deal. Senior party leaders told Assam Times that Modi opposed the deal only to woo the voters in the poll rallies. "We wont allow it to happen," said an AGP leader.

AJYCP leaders also sharply criticized Narendra Modi saying that he has hardly any difference with the erstwhile government at the Centre. “Then why he made much ado about nothing? Who gave him the license to give away land to Bangladesh,” said an AJYCP leader.

KMSS is also angry with Modi. Talking to Assam Times, the peasant body leaders rued that they find it difficult to understand how the deal would benefit Assam. Talking to Assam Times a KMSS leader said, “How it is helpful for Assam? How it would help the state deport Bangladeshi immigrants? Why did not he explained? It is the prime ministers honours the sentiments of Assam and its people?”

Notably, in his address at a huge party rally in Guwahati on Sunday, Modi openly supported the deal with Bangladesh to swap land saying that it would help the state permanently get rid of the decade old immigrant problem.

18 Oct 2012 - 2:17am | Ranjan K Baruah
In connection to the 50% cut off mark for the secondary Teachers Eligibility Test (TET) examination to be held on February, 2013 tentatively, All Bodo Students Union (ABSU) is not against the TET...

11 Mar 2015 - 10:30am | AT News
The Dimapur incident that sends shock and anger across the north eastern region has reached the  Gauhati High Court.The court has issued directives to the Centre and Nagaland government asking...

20 Jul 2017 - 9:25am | AT Kokrajhar Bureau
A poacher was arrested along with arms at Mushalpur in Baksa district on Wednesday.    In a joint operation of police and army, the poacher, who was identified as Pretarash Ekka of...