A crucial meeting between Dispur and Kohima is trying its level best to end the decade old border conflict between the states on Monday. Chief secretaries along with top ranked officials both the states are meeting in Dispur in presence of the Naga Tribes Association of Border Areas called at the instance of prime minister Narendra Modi who wants an amicable settlement of the conflict. 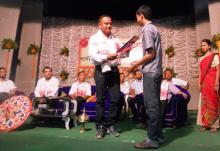 13 Jun 2011 - 3:55am | Ritupallab Saikia
All Assam Students Union, Golaghat Dist unit today organized a special felicitation ceremony at Amateur Theatre Hall to felicitate the top performers of the district in the recently declared HS and...

12 May 2009 - 10:33am | Juthika Das
As the researchers has been writing continuously that soft drinks are injurious to health and its bad effects, at Bhella area in Barpeta district found a packet of gutkha (Sikhar 1000) in a bottle...