Union home minister Rajnath Singh would be on a stock taking to the flood hit areas of Goalpara and Kamrup district along with South Garo hills in Meghalaya on October 1.

The flood waters in these two districts continue to recede following the halt of rains during the last couple of days. Singh has already sent Kiren Rijiju who wrapped up his aerial survey on Saturday afternoon.

31 Mar 2014 - 3:47pm | AT News
Chief Minister Tarun Gogoi on Monday alleged that BJP has support of NDFB-S to help its Tezpur candidate win the upcoming Lok Sabha polls.Addressing a poll rally in Borhat to campaign for BK Handique... 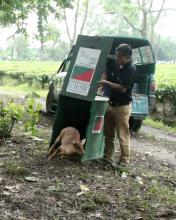 18 Dec 2016 - 6:48pm | Shajid Khan
Assam Governor Banwarilal Purohit would make his maiden visit to Udalguri on December 20. A special meet to this effect was held at Udalguri DC office on Saturday where Sadhana Hojai DC,...