Union home minister Rajnath Singh would be on a stock taking to the flood hit areas of Goalpara and Kamrup district along with South Garo hills in Meghalaya on October 1.

The flood waters in these two districts continue to recede following the halt of rains during the last couple of days. Singh has already sent Kiren Rijiju who wrapped up his aerial survey on Saturday afternoon. 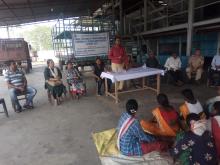 14 May 2017 - 5:00pm | Robertson Tanti
Men-elephant conflict refuses to die down in the Indo- Bhutan border of Udalguri district. A man lost his life in an incident of Elephant attack on Sunday morning while he came out from his house in...