In yet another crime against women, seven youths gangraped a 25 year old girl in Hajo when she came from Nalbari to meet one of them whom she loved after holding frequent telephone calls.

The incident took place on Saturday night where Fakaruddin Ali invited the woman from Nalbari, whom he befriended a couple of months ago, to enjoy a theatre at Ramdiya Bangalpara.

According to allegations, Fakhruddin Ali offered to drop the girl home. But instead he took her to a school building to be joined by his seven friends.

All they allegedly took turns to rape the hapless girl. After hearing her screams, the neighbours rushed to the spot and rescued the girl.

They held of three of the accused to be handed them over to the police. The trio have been identified as Alam Ali, Jaimuddin Ahmed and Hashen Ali.

The culprit Fakhruddin and four others managed to flee from the spot. Her medical test would be conducted at Gauhati Medical College and Hospital on Sunday. 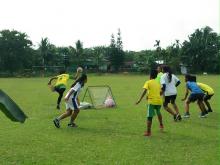