HANTIGIRI NARZARY, KOKRAJHAR: BTC Chief Hagrama Mohilary assures a Garo delegation of steps to implement the schemes for welfare of the entire community in the BTAD region.

A delegation Garo community led by Garo Stuents Union(GSU),BTAD areas called on Mohilary at his official chamber in BTC secretariat on Friday in Kokrajhar.

They further submitted a memorandum to Mohilary seeking steps for their all round development in socio-economic, eductaion and communication areas.

All out against Centre

30 Jul 2016 - 1:02pm | AT News
A huge convention in Guwahati on Saturday has vehemently opposed the Centre’s move to accord refugee status to the neighbouring Hindu nationals fearing that the north eastern state would have to bear... 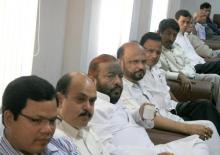 12 Mar 2010 - 7:41pm | editor
Amid a simmering political temperature Opposition Asom Gana Parishad walked out of the House in the Ninth-day of the Assam Assembly’s budget session on Friday. An acrimonious situation was...

28 Jul 2012 - 12:13am | Daya Nath Singh
I remember the day when my news report about Assam state’s excise department’s inaction in respect of auctioneering of liquor sales system in Guwahati, was not published in the news paper...