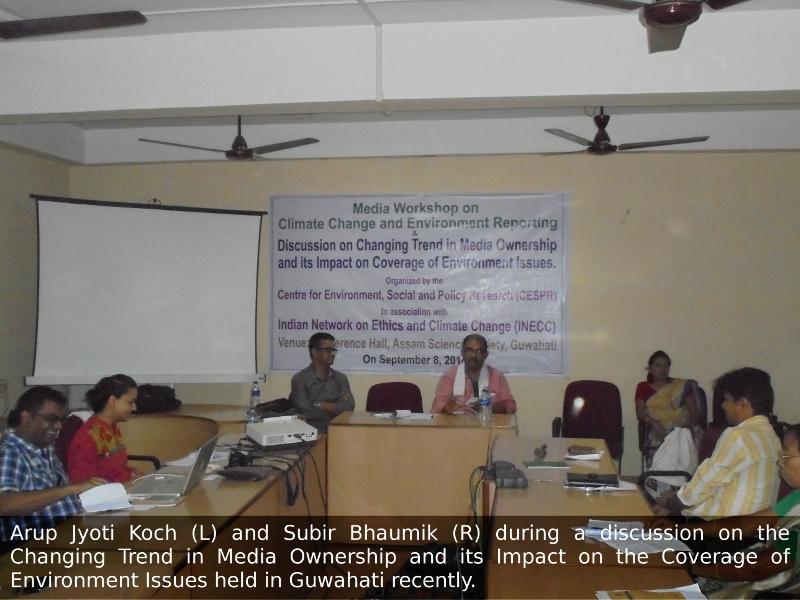 Titlled “Media Workshop on Climate Change and Environment Reporting and Discussion on the Changing Trend in Media Ownership and its Impact on Coverage of Environmental Issues,” the event explored in detail the different facets of the subject.

Ajita Tiwari Padhi, National Facilitator, INECC, while initiating the discussion on the prospect of low carbon transition for India, said, “While an appropriate response to environment crisis for the Government of India appears to lie in large projects like solar, hydel or wind power- which has a huge land and social foot print, the much needed step for us to ‘off-grid’ seems to be missing.” The focus should be on decentralized, people centred energy solutions which has a direct future impact in the energy deprived country, she said.

While India is embarking on a low carbon pathway it certainly needs to keep in perspective and context that it works from issues of poverty and development, she added.

Indian Express correspondent, Samudra Gupta Kashyap while delivering a lecture on ‘Reporting Climate Change and Environment from NE’ shared his experiences narrating anecdotes about various grass root activists and environmentalists. He brought to notice various lifestyle changes that have crept into peoples’ lives as a result of climate change and related variations.

He felt that the major problem facing journalists in reporting environmental issues is that they often do not know where to look for news. “There are innumerable stories of people and movements trying to protect the environment. But they often do not get the attention they deserve. The agenda of media organizations have changed exponentially,” he said.

Ruing the fact that most media organizations do not look into the root cause of most events, Kashyap said that the civil society and intellectuals too have a role to play in ensuring that issues which affects thousands should be properly highlighted, which is often found lacking.

Issues, especially related to environment and climate change often do not get the requisite attention in media circles because law makers very often have a stake in such organisations as well, he pointed out.

Leading the post lunch session with a discussion on ‘Trend of Changing Media Ownership and its Impact on Environmental Coverage, Senior Fellow, Centre for Studies in International Relations & Development (CSIRD), eminent journalist, and author Subir Bhaumik said that rapid corporatization of media organizations have led to a very clear shift in media priorities, with the very basic design of a media organization being compromised.

Pointing out that media is becoming more like a business-like commodity where the mainstream media expects specific kind of stories from certain areas. Due to corporatization core values have gone out of the window while stereotypes are created and reinforced.

"Even now, most environmental reporting in the Indian media is reporter driven. In India, there is a growing nexus of politics, business, crime and vested foreign interests as a result of corporatization which often influences news agenda,” he said.

24 Jan 2013 - 2:50pm | AT News
Yet another IED was found at Goreswar Gasbari area on Thursday morning. The IED was planted by suspected anti-talk faction group of National Democratic Front of Bodoland  near a culvert of...