NDFB-S militants have vehemently denied the allegations of their involvement in the Baksa incident where four traders were believed to have been killed on Friday evening.

In a statement, the anti-talk faction of the Bodo insurgent outfit blamed it all on the on going crisis within the Congress legislative body.

Publicity secretary NE Esara said that the government has been using the Muslims and the Bodos for safety and security of their political purpose. 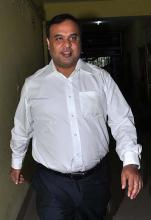 27 Jun 2014 - 10:30pm | AT News
The overall flood situation remains unchanged in Guwahati till Saturday morning where many parts of the city are reeling under the rain waters. The situation took a grave turn when 4 persons were...