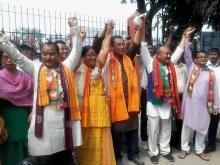 28 May 2012 - 8:15pm | editor
KMSS leader Akhil Gogoi on Monday ended his indefinite hunger strike against the NHPC-owned big dams in Gerukamukh. Gogoi who began fast unto death in Digholipukhuri on Saturday took the decision...