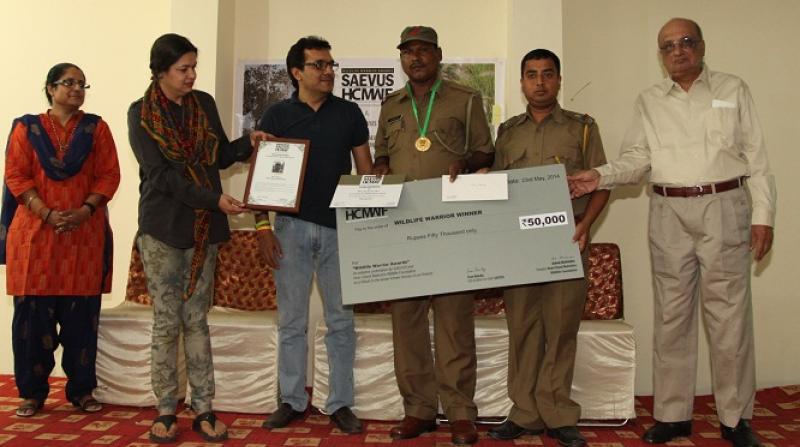 At the time when Manas is facing a difficult situation, there is a reason to cheer! As a special case,  Sunil Sarkar Game watcher has been awarded the prestigious Hem Chand Mahindra Wildlife Foundation & Saevus Wildlife Warriors Awards 2013.

These areas are very difficult areas as they are under siege, among conditions of the staff working there difficult--they do so at great risk.I would call these areas special category (in fact in the MEE report of tiger reserve, areas which were besieged by insurgency were given special consideration)  with recent (and ongoing) armed insurgency. A part of Manas is still inaccessible--a school teacher was killed, and kidnappings are routine.

After initial glorious years under the Field Director Shri Deb Roy,  Manas through the late 1980s and the 90s was under siege by insurgency. All the parks' rhinos were wiped out, elephants  tigers and other wildlife slaughtered ruthlessly—by some reports (and on the admission of some of insurgents) the illegal wildlife trade and timber smuggling also helped finance the movement), forest chowkis were burnt, foresters were killed, and department elephants, shot,  burn, killed. The insurgency saw the destruction of 28 camps and beats besides two range offices, the killing of half-a-dozen staff of various ranks including a Ranger, and several domestic elephants, looting of arms and ammunition, destruction of infrastructure including roads, bridges, etc. there are many deserving staff in Manas who have served there through these terrible years, and tried to protect its fast  decimating wildlife. Manas recovered, but continues to be very vulnerable to poaching, insurgency persists--and in such conditions, recognition of the staff will go a long way in boosting their morale, and motivating them.

Sunil Sarkar- Game watcher is one such front line staff game who has served in Manas over 30 years (and  also under the late Late Sanjay Debroy ).

Sanil Sarkar as he is known fondly by his colleagues is a classic case of old school forest management, when semi-literate young boys showing signs of courage were picked up by govt officials to work in remote forest locations.

Sunil does not remember his actual age, but legend has it that as a young lad (perhaps 14 years), he impressed the Park Director when he swam the 22 km length of Beki river from Mathanguri to Bansbari!   He was a small time hunter,  but was motivated to join as a watcher and serve wildlife, both by the Park Director and the then ranger( also keen on wildlife ) Srikantha Sharma. He was enrolled as a Game Watcher in 1986. And since then has been an asset to the park (vouched for by park authorites, and I have met him personally)

Sania sarkar has since then served in difficult areas such as Kapurpora, Sidajhar, Rabang and now Bura burijhar camps of Bansbari Range. He may not know how to use a mobile phone, but clearly remembers his lessons of using salt as a tool for wildlife management. Today, visitors throng his dilapidated camp which is the hub of wild elephants, gaur and other mega herbivores.

(When at Manas, ask for Sanil Sarkar, to show you elephants and tell you endless anecdotes and stories from the bygone era).

He is reticent about the days of insurgency, but he has served in various chowkis trying to protect wildlife—sometimes standing lone guard over his turf. The wildlife-elephants, sambar,—which he recalls used to gather around the chowki--perhaps they felt safer there. They used to give them salt from their rations, (and it was never sufficient, he says!). For months, he would have no communication with his family-that was the fate of most of the staff there-as communication systems had failed. Once the chowki he was in along with two other colleagues was burnt, but they somehow managed to escape.

He has faced insurgents-seen colleagues and park elephants being killed during his tenure. And when they tried to tackle poachers, timber smugglers --they faced their  ire, who retaliated by burning and destroying down chowkis and forest camps.

22 Jul 2007 - 8:38am | editor
After months of speculation, mud slinging, leg pulling by the political parties finally we have got ourselves a new president- a woman president at that which by the way is a first. History has been...