The doctors at the Assam Medical College Hospital in Dibrugarh have yet to resume their duties on Saturday.

The undergraduate and post graduate students have made it clear that they would continue to strike till they are assured of water tight security of the doctors and staff at the AMCH premises.

They have been striking after a ward body deployed at the gynecology department killed a PG student inside her duty room on Friday who was arrested in the morning. 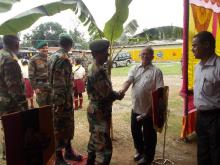 26 Feb 2009 - 8:15pm | editor
Government have considered and approved the request of the Assam Government for conversion of Institute of Advanced Studies in Science and Technology (IASST), Guwahati, presently under the Government...