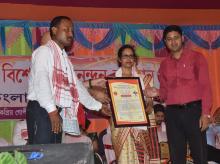 25 Jun 2017 - 7:41pm | Shajid Khan
Like every year the Tangla College unit AASU in co-ordination with Tangla anchalik AASU  (All Assam Students' Union ) feted the meritorious students who passed out last HSLC exam with...