Most of the party candidates attended the meeting at the party office on Friday. Senior party leaders told Assam Times that the name of Dhubri candidate would be announced in a day or two.

14 Jul 2008 - 2:54am | editor
Local women sit in protest at New Lambulane on 13-07-08 in connection with the extra judicial killing of Thangtinsei Kipgen and Limlenber Thangshing by the Police Commandos on Friday evening at... 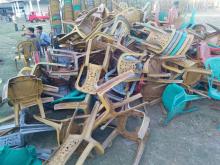