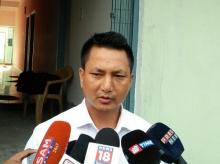 Needy families out of the reach of NFSA

24 Aug 2017 - 7:12am | AT Kokrajhar Bureau
Nearly 20 % percent beneficiaries are alleged to have been deprived  of the opportunity in the National Food Security Act(NFSA) in the four districts in  BTAD region. This was what BTC...

9 Oct 2015 - 9:41pm | Siddhartha Handique
In yet another incident that forces many people to shy away from Tejswi, a minor is battling for life in Golaghat minutes after she was administered folic acid. The incident took place at No 1...