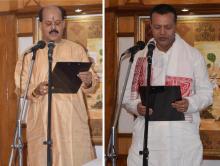 Siddique gets trade, welfare for Gautom

22 Sep 2015 - 8:28pm | AT News
Siddique Ahmed is industry and commerce minister while Gautom Roy is back as social welfare minister. But the Barak valley minsters took oath from governor PB Acharya at a simple function on Tuesday....

7 May 2015 - 8:49am | AT News
Normal life comes to a grinding halt from early in the morning following AGP’s 10 hour statewide bandh in protest against the Indo-Bangla land swap deal a day after the Rajya Sabha cleared the bill....