Religion-based partition of India a mistake

India’s partition in the year 1947 on the basis of religion was a great mistake. It was a part of conspiracy planted by the British rulers, who succeeded in managing Muslim League leader, Mohammad Ali Jinnah to be rigid on his stand for a homeland and independent nation for the followers of Islam dividing India between the Muslim majority and other communities dominated areas. Despite all efforts made by Mahatma Gandhi to keep the country united, the result was not conducive due to sticky stand of both the Indian National Congress (INC) and the Muslim League (ML) leaders, which led to the danger of chaotic situation in the country. The situation could have resulted in long stay of the British rulers in the country if immediate solution to the differences were not found. The division could have been averted if INC and Muslim League leaders could have shown sympathetic attitude and comprising formulae in the interest of the entire population of the country. A year before the partition the country had experienced wide spread bloodshed throughout which led to the longstanding bitterness which continues till now. The fateful decision was a wrong step in the destiny of both the countries. The countries emerging out of the division had to face a number of problems in respect of protecting their borders and managing running expenditures on the administration.

With the creation of Pakistan as an Islamic country by dividing India in three parts as East and West Pakistan and India, the minority Muslims of the country were also divided in two groups. On the one side were the Nationalists, who were opposed to leave their motherland and on the other the hard liners were in hurry to go to Pakistan. The result was horrible, the entire nation had to face a reign of terror. Communal violence rocked both sides of the country. Lakhs and lakhs of people had to leave their homes and go for in search of a shelter for themselves in the new and unknown places. Thousands of people lost their lives and properties in communal violence.

The creation of Pakistan could not achieve the result as per dream of its creator Mohammad Ali Jinnah. Both the Eastern and Western parts of Pakistan could not reconcile on linguistic, cultural and social aspects. Although they were followers of Islam, they did not like to live together. The eastern part of Pakistan was opposed to the domination of the western counterpart. They could not reconcile on the culture and language. After a long span of twenty four years the people of East Pakistan revolted against their western part in the year 1971. The revolt resulted in country’s division and formation of an independent nation namely, Bangladesh. The policy of the Pakistan government failed to bring prosperity in the other part of the country. Pakistan had to suffer much due to its wrong policies by keeping a step-motherly treatment with the other part of their own country. Democracy in Pakistan continued to be short-lived and army had to interfere in civil administration from time to time. Whenever an elected government by the people was formed, the allegations of misuse of power and corruption came on the way. To keep its hold on the government in Pakistan its army always had to play anti-India role in order to show its power and cover-up its faults.

The people of Pakistan in general prefer to have good relations with its neighbours like India and others, but the army of that country seems to be opposed to it. The reason for bitterness in Indo-Pak relations is the annexation of the state of Jammu and Kashmir to India at the time of independence. The state of J&K decided to be with India which Pakistan did not like because the state’s major population is Muslim, the followers of Islam. From time to time Pakistan tried to invade India and it has occupied a major portion of the state in its illegal possession. Religion based formation of a nation is no solution under the present changing scenario of the world. If that would have been, there could have been no more countries of the people having Islamic philosophy. Even now India has more Islamic people in comparison to Pakistan.

At present Pakistan has turned to be haven for the terrorists. Under the changing scenario of the world Pakistan is getting itself isolated. The United States of America (USA) and China are the major countries offering arms assistance to Pakistan in their own business interests. The result is that Pakistan is overloaded with heavy amount of foreign loan. Despite all efforts by the government of India to have friendly relations with Pakistan, the rulers of that country have not shown their interest to have cordial relations. Attempts from India is continue to improve cordial relations with Pakistan

Say no to frontier procession: ULFA

23 Sep 2012 - 9:19pm | editor
The United Liberation Font of Asom’s anti-talk faction on Sunday comes down heavily on BJP and its youth wing alleging that the proposed procession in Arunachal Pradesh would only provoke China... 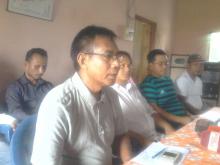 23 Apr 2014 - 1:18pm | Hantigiri Narzary
Suspected NDFB-S militants killed to milkmen in Kokrajhar district a day before the third and final phase of the Lok Sabha polls on Thursday.The incident took place at 11 in the morning at Bhogjhora...
Follow @Assam Times