Assam paid glowing tribute Lachit Barphukan across the state on Sunday.            People of all walks gave salute to the great Ahom General for his heroic and untiring deeds at the battle of Saraighat.     Senior district administration officials laid floral tribute to the great hero at the statue in Jalukbari.          Some other organizations in Guwahati also observed the Lachit day with pomp and gaiety.             Noted actors Nitish Bharadwaj and Rajesh Khanna attended two functions in the city. 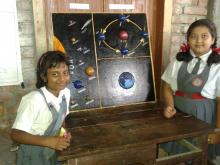 7 May 2016 - 5:17pm | AT Kokrajhar Bureau
Preparations have got underway to host the 49th biennial conference of Assam Madhyamik and Karmachari Santha with three days colorful programme scheduled beginning from May 11 at KDSA stadium in...

22 Feb 2014 - 12:24pm | AT News
UPA government came in for sharp criticism in Narendra Modi’s speech at a huge rally in Arunachal Pradesh on Saturday.Modi, the BJP’s prime ministerial candidate in his address at Pasighat said that...
Follow @Assam Times