AIUDF on Friday demanded immediate removal of Tarun Gogoi as Assam Chief Minister alleging that the minority people are not at all safe at the hands of Gogoi. A delegation of the party led by Maulana Badruddin Ajmal met Congress president Sonia Gandhi, and later demanded the removal of state chief minister Tarun Gogoi.

Speaking to reporters after his meeting with Sonia Gandhi, he said that the violence was only a false front to rid the area of non-Bodos. Before that the AIUDF delegation met Union home minister SK Shindhe.

10 Dec 2019 - 8:21am | AT News
Shops are closed in Guwahati on Tuesday following a 12-hour 'bandh' call by North East Students' Organisation (NESO) and All Assam Students' Union (AASU) against Citizenship Amendment Bill which was... 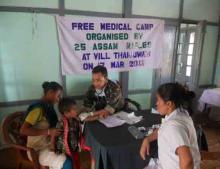 19 Mar 2013 - 1:15pm | Anup Biswas
As a part of its drive to provide facilities to the locals in the remote areas, The Assam Rifles carries out various civic action programmes from time to time. These efforts bring out the humane face...

20 May 2012 - 1:13am | editor
The All Arunachal Pradesh Students’ Union on Saturday demanded steps to resolve the decade old inter-state boundary problem with Assam. Addressing a press conference in Itanagar, AAPSU...
Follow @Assam Times