8 Jun 2008 - 3:35pm | editor
Assam and Meghalaya Chief Ministers will meet on Tuesday next to make an end to the border row which has simmering for years.Talking to Assamtimes.org, official sources here say Assam Chief Minister... 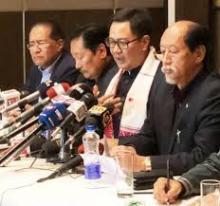 15 Oct 2017 - 2:11pm | Samhita Barooah
Rurality is a context where people define their roots. Any person from a rural background can survive in the toughest of living conditions. Women in the rural context have a major part to play. Rural...
Follow @Assam Times