The general election of All Guwahati Achik Students' Association (AGASA) has been conducted on May 1, 2012 at Meghalaya House, Guwahati. The election was presided by outgoing President Saljagringrang R.Marak with opening address by the same. In his address to the members gathered, he urged the students to get well prepared by working hard during their stay at Guwahati as students and make themselves selfless citizens of A'chik A'song to build a peaceful and developed place to live in harmony with all the people. The newly elected members comprises of:

In the end of election vote of thanks was delivered by outgoing Viace President Peterjob A. Sangma

12 Feb 2018 - 9:43am | AT News
GUWAHATI: A 24 hour statewide chakka bandh heavily disrupted the road transport services in Assam causing immense inconvenience for the commuters on Monday. All Assam Motor Workers Association has... 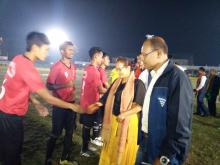