Assam Chief Minister Tarun Gogoi on Sunday doled out a slew of ambitious schemes on the new years day. Addressing a press conference, Gogoi appealed to the militant outfits to come back to the national mainstream to pave the for peace and development. Gogoi said the Government will put all its efforts to eliminate insurgency from the State this year.

The Chief Minister was addressing a press conference at Guwahati this afternoon on the occasion of the New Year. Gogoi asked those organizations to take up their issues with the Government for amicable settlement. He said that his Government will accord high priority to mitigate the Brahmaputra river bank erosion problem in the New Year 2012. The chief minister announced that a super specialty hospital will be set up in Guwahati within next one year. Fifty bedded cancer wings will also be set up in all the four medical colleges of the State to facilitate treatment of cancer patients.

18 Sep 2014 - 4:15pm | AT News
A people friendly policy and technology is required for extraction of natural resources in Assam and its neighbouring north eastern states.This was more or less of what Dr Subrata Borgohain Gogoi... 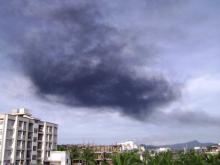 30 Aug 2009 - 10:19am | editor
Properties worth crores of rupee were reduced to ashes as a devastating fire broke out at the Guwahati refinery in Noonmati on Sunday. The incident took pace at around 2-40 in the afternoon at an...

5 Jun 2014 - 10:44am | AT News
A top businessmen from Guwahati is believed to have been in Jharkhand immediately after he landed in the state on Tuesday. There is no trace of Onkarmal Agarwalla, after he arrived in Jharkhand on...
Follow @Assam Times