The Bharataya Janata Party candidate Mridul Dutta filed his nomination today before the returning officer at golaghat for 97 no. Dergoan LAC. Dutta was accompanied by a large number of his well-wishers, supporter & party workers. Taking to reporters after filing nomination Dutta said he will fight against the missuse of government funds both in pancayat and block level. He said that the the area is still very backward and there are much more thing to do in health, rural development, electrify etc. He also confidently declared that he will get more than 35,000 votes in favour of BJP in coming election. 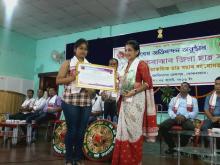 5 Jul 2016 - 6:26pm | AT Kokrajhar Bureau
The All Assam Students Union(AASU) demanded full facilities to absorb of all students in the admission in all colleges to gain educational spirits across the state who were passed in final...