Krishak Mukti Sangram Samiti (KMSS), activists led by its Secretary Akhil Gogoi, observed a 'Hatred Day' against the alleged rampant corruption in the state by the congress led State Government, at Dispur Last Gate in Guwahati, Assam on 10-01-11.

Permalink Submitted by Barnadhya Hazarika on Thu, 20/01/2011 - 03:38
He's a kind of hybrid animal!! Who appealed innocent rural people something which is really inhuman i.e. He says "To pray to god that Hon'ble CM Sjt Tarun Gogoi should get sick and also said d people to use weapons like bow, swords, draggers against Officials and Employees of World Heritage Site Kaziranga National Park!! Please realize his real face of Maoism!

29 Nov 2007 - 9:12am | pbaruah
The All Assam Adivasi Students Association gives a 48 hour deadline for the government to clear the whereabouts of 32 protesters who they claim, have been missing from the violence spot on the...

8 Mar 2016 - 10:19am | Shajid Khan
Maha Shivaratri, the ‘night of Lord Shiva’, was celebrated  in the town in  a grand manner, with devotees revering Shiva – one of the deities of the Hindu trinity, since early morning today... 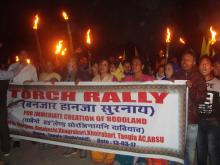