Manas Konwar, executive president of the Chatramukti Sangram Samity, the students' wing of the KMSS, has been arrested on Thursday by the NIA.

According to some information a sleuth of the National Investigation Agency picked up the Chatramukti Sangram Samity leader.

He has been arrested for his alleged involvement with Maoist, sources revealed.

Earlier, the NIA arrested Akhil Gogoi, leader of the KMSS on similar charges.

Currently, he has been kept behind bars.

Both the KMSS and Chatramukti Sangram Samity have been vehemently protesting against the Citizenship (Amendment)Act, 2019.

15 May 2011 - 4:00am | Peter Alex Todd
The comeback of congress to regain power for the third time in Assam under the leadership of Tarun Gogoi was not at all unexpected, but the margin of the result was unexpected by and large. The... 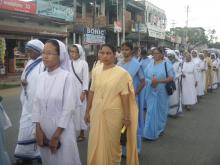 ‘Evening with a Doctor’ program at press club mooted

26 Jun 2016 - 5:20pm | AT News
Emphasizing on preventive healthcare initiatives for the media persons a special program titled ‘Evening with a Doctor’ is mooted at the premises of Guwahati Press Club (GPC). Under this program a...
Follow @Assam Times