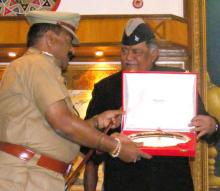 15 May 2008 - 2:40am | editor
Pradip Ranjan Kar, APS Additional Superintendent of Police North Cachar District has been awarded by the Governor of Assam Lt. Gen. (Rtd) Ajai Singh, for his outstanding contribution to lead from the...

25 May 2017 - 9:21am | AT News
At a time when fake encounters take the centrestage of nationwide debate, a CRPF top gun posted in Assam makes a stunning revelation on a recent gunbattle in Chirang district where the security...

Alert in Guwahati on ULFA threat

16 Sep 2012 - 2:36am | editor
Security has been beefed up in Guwahati following ULFA’s threat to strike in the city with car blast. Checking has been intensified following intelligence inputs that cadres of ULFA opposed to...
Follow @Assam Times