KOKRAJHAR: Chief of Bodoland Territorial Council (BTC) Hagrama Mohilary said the Bodoland People's Front (BPF) will continue its alliance with BJP and AGP in the upcoming BTC election due next year.

Mohilary while attending at a meeting in Kokrajhar on Thursday, said this.  Mohilary, who is also president of BPF said that his party will have its seat sharing with alliance partners and party is hopeful that BPF is getting majority supports in the council.

BTC was created in 2003 with four districts under Sixth scheduled of Indian constitution. BTC Legislative Assembly has 40 member house.

BPF is in power since the creation of BTC.

On alliance with United People's Party Liberal (UPPL), Mohilary said that he was ready to settle political unification, but no seat sharing in the upcoming elections.He said that BPF party always want unification of parties in BTC region.

However, UPPL expressed their gestures that party will have alliance on seat sharing condition. 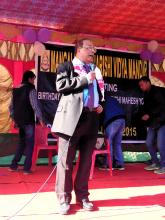 20 Sep 2015 - 10:51pm | HK Roy
Around two hundred school students of of Pasighat participated in the mini marathon for anti-drugs awareness campaign on Sunday. Organized by the East Siang district SSA mission with an aim to spread...
Follow @Assam Times