A plantation programme was carried on in the school premises followed by interaction with the young students.

Sushil Tamuly and S Roychoudhury CMD and Director respectively of the school also took part in the plantation programme.

25 Aug 2014 - 9:50pm | AT News
The Assam government has received a huge fund of Rs 520 crore from the Centre to modernize police since 2004. The disclosure was made in the Assam Assembly on Monday by forest and environment... 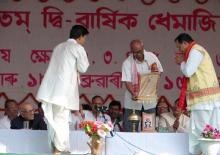 21 Jul 2016 - 3:18pm | AT News
The Assam State Human Rights Commission has asked the government to probe the recent police firing in Raha where a local protester was killed. A division bench of the panel comprising Dr Justice AH...
Follow @Assam Times