Guwahati: A wild confused wild jumbo wreaked no less havoc among the Guwahati denizens on Tuesday evening forcing the authorities to resort to tranquilizer.

The strayed animal which managed to enter into the city from the nearby hill areas was spotted in the busy GS Road forcing the people to flee.

Police and para military forces and forest guards took resort to tranquilizer to drive out the animal at 7 in the afternoon much to the respite of the people who were left unharmed.

16 Oct 2015 - 6:26am | AT News
Kokrajhar Rhinos are taking on Parbatjhora Panthers at the BTC-Army Goodwill Football Premier League 2015 at Sports Authority of India (SAI) ground in Kokrajhar on Sunday. The winning team will get... 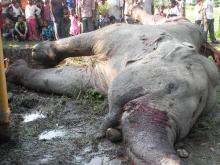