At least two persons died and two others received serious injuries due to thunderstorm struck in lower Assam's Chirang and Barpeta districts on Sunday.

A 16 year old girl died and two others received serious injuries of a family at a remote village due to thunderstruck in Chirang district. A heavy thunderstorm and rain at around 4.30 in the afternoon which claimed a student of class X student of Bishdowa village, Panbari in Chirang district. The deceased was identified as Ajmina Kathun, daughter of Ajijul Haque. Two others of the same family received serious injuries. They were immediately rushed to local hospital. 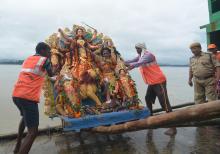 30 Sep 2017 - 5:09pm | AT News
The pomp and gaiety that gripped Assam and Meghalaya for Durga puja along with other parts of the country came to an end on Saturday evening as the idols of the goddess of strength were...

Sea of humanity atop Nilachal

22 Jun 2015 - 11:21am | AT News
Kamakhya temple premises turns into a sea of humanity as Ambubachai festival gets underway on Monday.Amid tight security arrangement, lakhs of devotees and tourists are thronging the ancient temple...
Follow @Assam Times