Kokrajhar: Manipur football team defeated Assam team 5-4 via penalty kick in the final match of the 64th edition of National School Games for U-14 football(boys)  held here at JNV, Ranchaidham Basugaon in Kokrajhar on Friday amidst large gathering of sports lovers.

Altogether 550 participants from 31 states  across the country took part in the national event which was organized by School Games Federation of India(SGFI).

The school games has been organising every year to create sporting talents in the nation.The mega event had witnessed 62 matches during the four day scheduled and being conducted at six-grounds,apart from JNV groound,Goybari Jwhwlao Club ground,JSB Bangaldoba ground,Basugaon HS School ground,CDSA Kajalgaon ground stadium and Kashikotra HS School ground.

In the final match,both team was goalless with draw during the full time.Later,a penalty kick was organised in which Manipur beat Assam 5-4 and lifted the championship trophy.

Championship team was awarded trophy on the occasion.

BTC deputy chief Kampa Borgoyary,president of Assam football association Hemndra Nath Brahma,BTC Sports CHD Jajnawati Basumatary were graced as guest on the occasion and handed over the prizes to the championship.

Commissioner of Navadaya Vidyalaya Samiti, BK Singh extended his sincere thanked to the organiser and participants who had participated the championship. The national games got healthy response from all quarters on organising the events across the country.He has expressed his highly satisfied with the events arranged in BTAD region as all programmes had gone healthy successful.

9 Apr 2014 - 2:38pm | AT News
Former Congress MP Mani Kumar Subba’s condition refuses to improve on Wednesday two days after he underwent a brain surgery at the Medanta City Hospital in Gurgaon.According to sources, Subba who was... 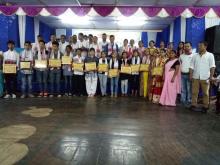 5 Oct 2007 - 8:58am | editor
More than 3000 young professional NRIs in 58 locations across US and other countries including India, participated in a global vigil for farmers. "The tragic farmers' suicides are, finally,...
Follow @Assam Times