Hojai: The Daboka Police in Hojai caught two notorious car lifters acting on a false complaint filed by the duo on Thursday.

Identified as Aamir Hussain and Emamul Hussain, they lifted a car and sold it in Dimapur and lodged an FIR at Daboka Police Station on Wednesday alleging that their Bolero Pick Up AS 02 BC 1459 was forcibly taken away by robbers at Shalbagan area as they were going towards Dimapur.

Then the Daboka Police registered a Case No. 88/2018, started the enquiry where the real incident came to light. Both they were caught on Thursday before producing them before a local court in Hojai.

Artists taking out a peace rally 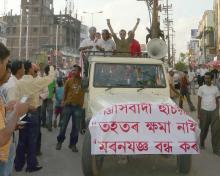 28 Jan 2017 - 10:38pm | Raktim Baruah
The sudden decision of Assam government to distribute free text books among government aided school students across the state draws resentment from various sections including the All Assam Publishers...