GUWAHATI: A suspected illegal Bangladeshi settler sprung no less surprise in the Gauhati High Court as he claimed to have found his name in the NRC draft forcing the court to ask for response from the government and NRC authorities.

He is none other than Ali Ahmed from Lahorighat in Nagaon, whom the foreigners’ tribunal identified as illegal infiltrator on November 22, 2011. Later, the Gauhati High Court upheld the tribunal’s order.

But of late, Ali has moved the high court with an appeal to quash its earlier order claiming that he has found his name in the NRC draft.

Then the court has issued directives to Assam Government and NRC authorities to clear their positions. 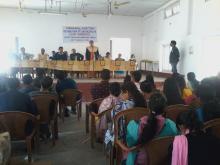 4 Jan 2016 - 1:10am | Hantigiri Narzary
A total of 150 master trainers’ training certificates  were given away at a programme held at Basic Training Centre in Kokrajhar on Sunday. A 15-days long training programme was conducted on...

10 Jan 2018 - 10:34pm | AT News
HOJAI:Plastic materials worth several lakh reduced to ashes when a huge fire broke out at s shop in Hojai to town on Wednesday.The incident took place at around 8.30 in the evening where fire...

17 Oct 2015 - 10:27pm | Siddhartha Handique
A pall of gloom descends in Golaghat when a bus rammed into a biker in the outskirt of the town on Saturday. The accident took place in Padumoni the speeding bus bearing No AS05-B-5309 hit the...
Follow @Assam Times