Various Bodo organizations in BTAD have announced a series of fresh agitation to revive the struggle for a separate Bodoland.

These include ABSU and its allied groups NFFB, NDFB-P and PJACBM who are prepared to mount pressure on thr Centre with series of agitation from August 28 in the form of national highway blockade, mass hunger strike etc.

The agitation was finalized at a joint meeting at the Bodofa House on Sunday in Kokrajhar where the leaders pledged to go all out for the demand.

ABSU president Promod Boro said  they would demanded sn early solution of the issue through political dialogue. He has slammed the BJP led NDA government for not taking any bold steps while solving the Bodoland issue. He said that though the BJP had promised to solve the Bodoland issue in their 2014 election manifesto, but till today no any measures were reached.

He said that militant leaders of NDFB, who are still in jail should be released without any conditions in the line of the ULFA as the NDFB are in ceasefire with government. He has urged the government to make early solution of the NDFB problems.

12 Nov 2019 - 9:19pm | Shajid Khan
UDALGURI,November 12: Along with the rest of the state Guru Nanak Jayanti was also celebrated with religious fervour here at Sri Guru Singh Sabha Guruduwara,Tangla in Udalguri district on Tuesday...

21 Apr 2012 - 4:03am | editor
The Assam government on Friday urged the Centre to include seven districts in the Integrated Action Plan as soon as possible. In a memorandum to prime minister on Friday, Chief Minister Tarun... 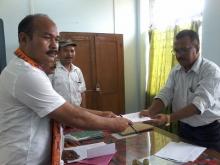