After a brief gap, yet another witch hunting incident has triggered shock and anger in Koktajhar where a section of local residents in a remote hamlet assaulted a person who is now undergoing treatment at a hospital.

The incident took place on July 18 at Dekadamra the villagers assembled at a public place and flogged Rabiram Narzary alleging witch craft.

Later his family members rushed the 52 year old to the Kokrajhar RNB civil hospital where he is undergoing treatment. The  incident come to light after a week when a team of Kokrajhar media visited the village on Monday.

His family members lodged a complaint before the seeking action against the perpetrators. Talking to reporters, his daughter Samaina Narzary said her father do not know anything about witch craft since he is a farmer.

Rabiram Narzary,who is under treatment said that led by the headman attacked him and refused to listen to him. “I don’t know anything about witchcraft in my life. I am illiterate. But they mercilessly beat up me.

Socail rights activist Biru Bala Rabha condemned the incident and urged district administration to take stern step against the people involved in it. She raised the demand at an awareness camp on Monday organized by the Assam Science Society organized at the Bashbari High School on Monday which drew huge support from many leading citizens and NGOs. 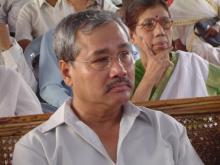 4 Oct 2012 - 8:48pm | editor
A hardcore ULFA militant was killed at an encounter with security forces in Tinsukia district on Thursday. The gunbattle took place in the wee hours at Torani reserve forest near Pengeri. Acting on a...
Follow @Assam Times