A huge rescue team of IAF,  army and police is leaving for a place situated 30 km in the north west of Tezpur to recover the Sukhoi 30 a day after the missing fighter jet was located with the help of satellite images.

The rescuers have been finding it difficult to reach the spot in the dense jungle terrain because of an inclement weather where the jet fighter was understood to have crashlanded.

According to sources, the rescuers are expected to reach the spot in the afternoon to rescue the wreckage of the fighter jet which took off from the Salonibari airbase in Tezpur at 10.30 in the morning on Tuesday on  routine sortie with two pilots on board.

The crash site is believed to be a few km away from where it lost radio contact forcing the authority to deploy a huge team of AIF, army and police. 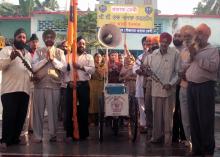 24 Mar 2017 - 8:10pm | AT News
The United Liberation Front of Asom (ULFA) has strongly opposed the move to link the Brahmaputra with the Ganges alleging it an attempt to deprive Assam of it's rights over the water resources.In an...
Follow @Assam Times