The post flood situation in Namsai district of Arunachal Pradesh was reviewed by the Deputy Commissioner. At a meeting on Monday. MLA Namsai Chau Zingnu Namchoom along with all senior officials of Namsai district were present in the meeting.

17 Feb 2012 - 2:50am | editor
Guwahati still remains a safe route for insurgent activists who are waiting to monger trouble in the city. Four hardcore Manipur insurgents were arrested during a joint operation by the security... 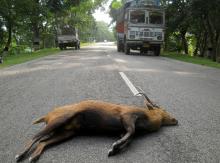 7 Sep 2012 - 4:08pm | Mubina Akhtar
It was a joy ride from Darjeeling to Ghum. My co-passenger, a Mexican in his late sixties, was nodding playfully to the chug-chug of the doughty engine as the tom thumb coaches struggled uphill. His...
Follow @Assam Times