At last forest department has managed to arrest poacher Manu Bazbaruah from the city on Monday. According to information, Manu was arrested on his way to the Santipur based forest office. Later he was produced before the session court in the city which remanded him to fourteen days judicial custody. It may be noted that a joint operation by police and forest department seized deer meat, elephant leg, skjin of tigers and a huge cache of arms and ammunition from his Dispur based residence but he was not available. Of late, Bezbaruah evaded police arrest with an anticipatory bail petition.

All out against illegal tax

13 Jul 2015 - 11:12am | Hantigiri Narzary
The People's Coordination for Democratic Rights (PCDR) is going all out against illegal tax collection in BTAD areas.The organization will be on a 36 hour strike on Tuesday alleging illegal tax near... 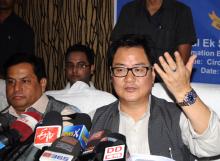