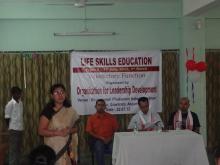 23 Jul 2012 - 1:45am | editor
To promote the importance of life skills and how youth can cope up with different problems a life skills education programme was held from 2-17 July at Dispur. The programme was organised by...

12 Jun 2014 - 9:37am | Azlina Khanam
Arshad Ali’s 'The Essence of Love' was launched on June 11 at Guwahati Press Club by the reknown writer Girish Bhattacharje. Talking about the book, the young writer said that Love is is not just a...
Follow @Assam Times