In yet another incident that touches off a seismic wave of shock and anger across the state, a tea garden worker beheaded a minor boy in the name of puja offering to the god before being lynched by mob in Sonitpur district.

The bizzare incident took place at Rongapara area where Nanu Mirdha in the Tarajuli Tea Estate beheaded Sanatan Bag at his residence.

When the shocking news started spreading like wild fire, the local residents in large number raided his residence, dragged him out and lynched him.

Police and para military forces arrived in the spot and brought the situation under control. DC Lalit Gogoi and SP Sanyukta Parashar have been monitoring the situation.

22 Aug 2010 - 4:54am | editor
A delegation of Assam BJP on Saturday called prime minister Dr Manmohan Singh in Delhi and apprised him of the problems confronting the state for decades. The delegation comprising Bijoya Chakrabarty...

28 May 2012 - 1:02pm | editor
Purvotar Hindi Academy, Shillong organized a three day “Rastriya Hindi Vikash Samelan” at Rajasthan Vishram Bhawan, Shillong on May 25 to 27, 2012, to popularize Hindi language in the... 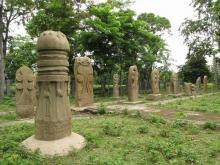