A vigil security has been beefed up in BTAD region during counting of votes tomorrow and victory rally has also been banned after declaration of results to prevent unwanted incidents in Kokrajhar.

He said that the counting of fate of 88 candidates for 12 constituencies in the district will take place at Kokrajhar, Gossaigaon and Parbatjhora sub-division beginning from 8 am and expected that result declaration would be completed by 6 to 8 pm. He said that 378 polling officials were involved in the counting of votes for five halls of the counting which incuded Fakiragram(14 tables), Banargaon(12 tables), Debargaon (12 tables), Baukhungri (10) tables and Salakati(10 tables).He also told that no mobile would be allowed to the counting ahll except AROs and involved officers during countings.

One each company from CRPF was deployed besides Assam police and some other jawans from security forces to guard the strong rooms in the district . More security forces would also be deployed in constituency wise during counting of votes tomorrow, Malakar added.

Malakar has held meetings with candidates from various party and organisation and zonal and sector officers of the elections and discussed thorougly to maintaining peaceful and integrated during counting of votes.

Altogether 315 candidates contested the council election and their fate was sealed in to ballot boxes in the four districts.

5 Jul 2010 - 2:03pm | editor
Normal life in Assam is partially affected following the 12 hour countrywide Bharat bandh which has began in the morning. Barring government buses others are remaining off from the state. A section... 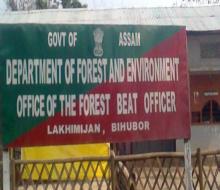 22 Jan 2008 - 9:32am | editor
Nine people have been injured while a powerful bomb exploded at Srirampur in Kokrajhar on Tuesday. According to information, the blast took place at around 11-45 in the morning besides the MVI gate....
Follow @Assam Times