Congress candidate Rajdeep Goala stole the show in the assembly by polls defeating his nearest rival AIUDF candidate Mukesh Pandey at the end of the poll counting on Tuesday. The son of former MLA Dinesh Prasad Goala obtained 80,096 votes followed by AIUDF candidate where BJP candidate had to remain satisfied with third position. 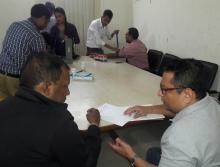 26 Nov 2017 - 11:02am | Azlina Khanam
As part of Guwahati Press Club’s continuing initiative for regular health check-up and instilling proper health awareness among mediapersons, its ‘Evening with a Doctor’ program this Saturday...