Early lead for AIUDF in Lakhipur

The poll counting got underway at 8 in the morning after the opening of the strong rooms.

Amid tight security the votes are being counted in the electronic voting machines. The authorities have already deployed sufficient security forces at counting booths to ensure free and fair counting.
. 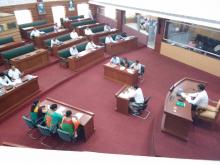