Another body fished out from Beki

One after another bodies seem to have surfaced in BTAD areas a week after it was rocked by a string of violence.

Local residents in the worst-hit Narayanguri recovered the body of a minor boy from the Beki river in Moinabri.

With this, the death toll in the BTAD violence has gone up to 40. Chief Minister Tarun Gogoi on Thursday confirmed 39 deaths before the recovery of the body. 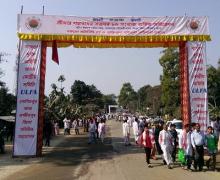 12 Apr 2013 - 5:12pm | AT News
One more rhino lost its life at the hands of the poachers in Kaziranga. The poachers managed to flee with the horn. Forest officials spotted the dehorned carcass at Agoratoli range on Friday....
Follow @Assam Times