UDALGURI::Phulmoni Daimari, a Class VIII student of Udalguri Girls’ Higher Secondary School of Udalguri district, has been selected in the ten-member girls’ sub-junior Assam boxing team. The team was selected by the Assam Amateur Boxing Association ( AABA) for the 1st BFI Sub-junior Girls’ National Boxing Championship. To be hosted by the Maharashtra Boxing Association (MBA), the Boxing Federation of India’s first Sub-junior (U-15) Women National Championship has been scheduled to be held at Nagpur in Maharastra from September 2 to September 7, 2018.

Meanwhile, after her selection for the State boxing team, Phulmoni Daimari was felicitated by the teachers and students of Udalguri Girls Higher Secondary School on Monday to encourage her so that she along with the other team members of the State can bring laurels to the district and the State delivering their best in the forthcoming national championship.Phulmoni Daimari’s coach Dhaneswar Basumatary, who runs the Dhaneswar Basumatary Boxing Training Centre, Udalguri, informed that she is being imparted all possible training for the forthcoming championship.

22 May 2012 - 3:27pm | editor
IED seized from ULFA linkmen A major incident of explosion was averted when police recovered a powerful IED in Goalpara town on Monday. The IED weighing around 3.5 kg, meant to be planted in the town... 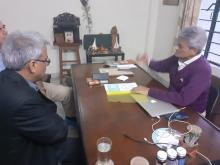 3 Dec 2017 - 6:30pm | AT News
GUWAHATI: All of a sudden, the river Brahmaputra has started flowing with dirty water much the major concern of the millions of people in Assam to have spotted the disaster in their lifeline. The...
Follow @Assam Times