Kokrajhar: The All Assam Minority Students Union (AAMSU)  slammed the state government as well district administration for not allowing the students union to stage protest against D-voters issue in the state.

AAMSU was supposed to stage a protest against government over D-voters’ issue in Kokrajhar town near Children Park.

Hundreds of students union and minority people gathered at the venue, but district administration refrained them from holding protest rally.

The students union strongly condemned the district administration's decision and demanded early closure of the D voters cases while making succesfull update of the final draft of NRC  in the state.

27 Aug 2011 - 9:35pm | Hamidul Gani
Two NDFB cadres were apprehended by security forces and seized arms from their possession in Assam-Meghalaya border near Dudhnoi in Goalpara district in the wee hours of Saturday. According to... 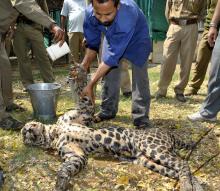 10 Dec 2012 - 4:44am | editor
Chief Minister Tarun Gogoi on Sunday said that proper education should be implemented from the grassroot level.In his keynote address at the Pan IIT Global Conference 2012 Science City Auditorium in...
Follow @Assam Times